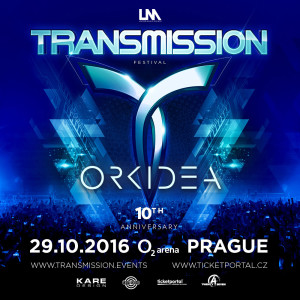 Numerous times voted #1 DJ in Finland and one of the most popular DJs in Scandinavia will bring his sound to Prague. After performing at over 1500 shows around the world DJ Orkidea is heading to Transmission on October 29th 2016.

Orkidea’s recording career started in 1999 with his debut single ‘Unity’ which both Sasha and Paul Oakenfold used to open their BBC Radio 1 Essential Mixes with and it was later licensed to Gatecrasher and the Renaissance compilations. Gigs together with Tiësto resulted in getting signed to the Black Hole label while remixes for the likes of Paul van Dyk, Way Out West and Paul Oakenfold have been some of the most high profile ones alongside his own hits ‘Beautiful’ and ‘Metaverse’. He has also been active on the collaboration front with ‘YearZero’ (together with Andy Moor), ‘Gods Garden’ (with David West) and ‘Slowmotion’ (with Solarstone) all enjoying classic status amongst clubbers around the world.

During the years Orkidea has been voted six times as #1 DJ in Finland and twice as #1 DJ in Scandinavia. His success on charts includes ten Beatport Top 10 singles, various iTunes Dance Top 10 positions and Finnish Singles Chart #1 with ‘Beautiful’.

To Orkidea electronic music has always been about pushing the boundaries whether it’s in studio or at gigs. “Uniting the sounds, the minds, the people…”. People of Transmission get ready to unite with Orkidea!