Share
Tweet
Share
Share
Pin
Paul van Dyk is firmly back in album-mode, today announcing a fall tour across North America, ahead of a new album in early 2020. The iconic trance producer/DJ will be hitting 12 cities in the US and Canada throughout November, including key markets such as NYC, Miami and Chicago, previewing his forthcoming album to adoring fans across the continent. His new album will be titled Guiding Light and the pre-album tour is aptly named MISSION: Guiding Light, the first stage of this ensuing sonic journey.
MISSION: Guiding Light will take music lovers on a journey to find their guiding light through the power of music. During the course of his career, van Dyk has embraced personal development and empowerment, encouraging his fans to follow their passion and pursue their dreams. This new album will encapsulate van Dyk’s lifelong mission to motivate others, serving as their guiding light in the pursuit of happiness. On the MISSION: Guiding Light tour, van Dyk will play tracks from the album to a North American audience for the first time, teasing what’s slated to be one of his most energetic albums to date.
“It’s always an aim to inspire others through music, and that’s my mission with my new album Guiding Light. I collaborated with some of the most talented up and coming artists in trance music over the past year, recording sessions across the world from my home studio in Berlin to hotel rooms in far corners of the globe. It’ll be a joy to share the album with my North American fans for the first time, can’t wait to see you all soon.” – PvD remarks of the new album.
Paul van Dyk has had a busy summer, hosting the 2nd consecutive SHINE Ibiza residency at their new homebase Club Eden, in between various festival dates that included EDC Las Vegas, Creamfields and Nature One. van Dyk even curated the SHINE Stage at Tomorrowland, proof that the residency has stretched beyond its initial home of Ibiza and a testament to the passion for trance in the dance music community. With a string of singles lined up for release in the coming months and the upcoming tour of North America, van Dyk looks to finish the year strong, heading into the release of his 10th studio album in early 2020. 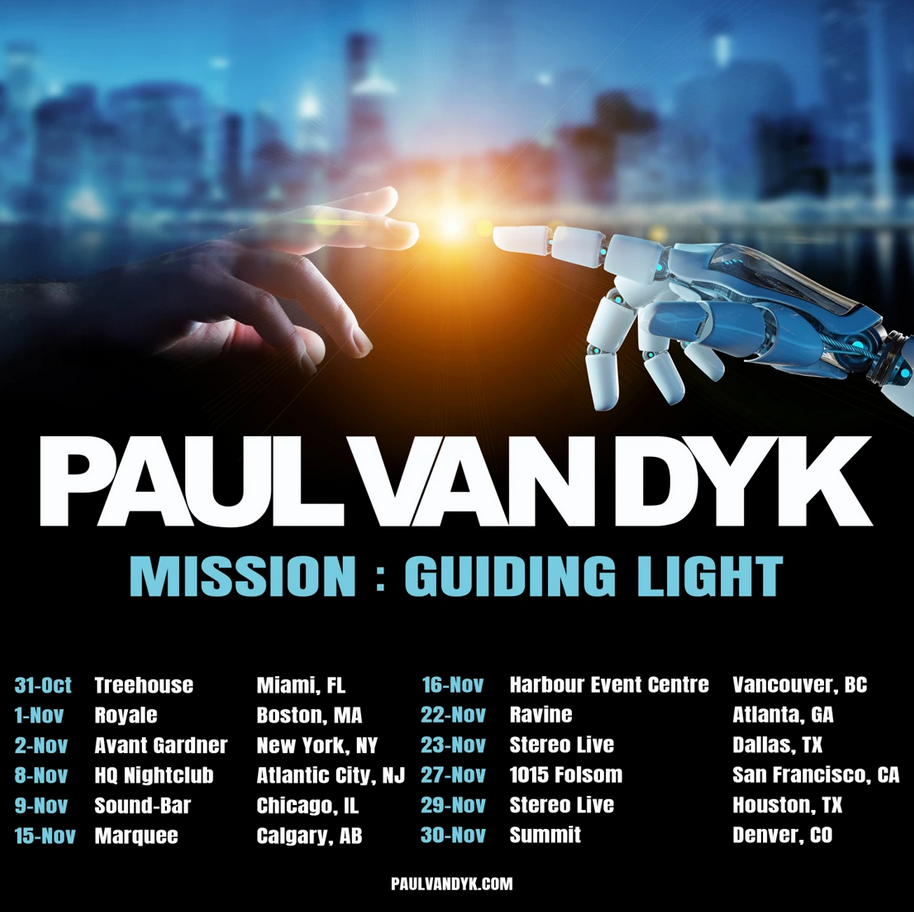 Van Dyk’s story begins not in a superclub or on the main stage at a music festival, but in his mother’s kitchen. The year was 1985, and his family was living in Communist East Germany, which at the time was still divided by the Berlin wall known as the “Iron Curtain.” Paul spent much of his time tuning into the radio stations broadcasting from the West side of the wall; to him, they were his only connection to the outside world and a freer society.

It was on these airwaves that he first heard the sounds of electronic music. Such an event may seem trivial to some people, but it would prove to have a lifelong effect on the young teenager, who over the course of the next 30 years would go on to attain recognition not just as a forefather of trance, but as an overall icon of electronic music.

After briefly living in Hamburg, he then returned to Berlin in 1991, marking his first hometown performance that March at the just-opened club Tresor, which has since become one of the city’s cultural landmarks. Soon after he began DJing, van Dyk expanded his talents to making electronic music for himself. In 1994, he released his debut album, ‘45 RPM’; one of its tracks, “For An Angel,” is regarded by Mixmag as one of the greatest dance tracks of all time. In the following six years, van Dyk followed up with his 1996 album ‘Seven Ways,’ which put him firmly at the forefront of trance’s emerging scene.

The public recognition would only grow with the 1999 launch of his new DJ residency at Cream Amnesia in the world party capital of Ibiza; 17 years later, it’s still going strong as one of the longest-running residencies in clubbing history. In 2000, he launched his own label, VANDIT Records, its first release being his third album, ‘Out There and Back.’ In 2005, his fourth album ‘Reflections’ penetrated the pop culture membrane with a Grammy nomination in its first-year category of Best Dance/Electronica Album.

A further testament to his musical abilities, van Dyk has remixed some of electronic music’s biggest names—Deep Dish, Faithless, and Underworld, to name a few—in addition to Top 40 radio icons including Madonna, Britney Spears, and U2. His music can be heard in films such as ‘The Dark Knight,’ ‘Sisterhood of the Traveling Pants,’ and ‘Zurdo’ (the latter for which he won a Mexican Oscar), as well as for HBO, Land Rover, and Motorola commercials; and the ‘Mirror’s Edge’ video game.

Having been exposed to a larger audience, van Dyk aimed to reach higher heights as dance music broke out of clubs and raves and into public consciousness. His next two albums, 2007’s ‘In Between’ and 2012’s ‘Evolution’ yielded both critical and commercial success—Mixmag wrote that van Dyk had “achieved evolution in both name and nature,” while DJ Mag called it “impressive” and “multidimensional.” In 2008, his New Year gig in Rio de Janeiro set attendance records with 1.3 million people coming out.


All fame and club-hopping aside, van Dyk also has a political side he’s not afraid to showcase. In 2001, he started a mix compilation series titled ‘The Politics of Dancing,’ which was inspired by observing people of warring regions Palestine and Israel dancing together in peace. In 2010, he returned to Berlin to celebrate the 20th anniversary of the falling of the Wall with a one-day event aptly called We Are One, and in 2015, he wrapped up his Politics series with his seventh album ‘The Politics of Dancing 3.’ He has also taken up the banner for charities such as Rückenwind, which helps underprivileged children in Berlin; India’s Akanksha Foundation; the FEED Project; Peace One Day; and anti-war and voting movements such as Rock the Vote. His philanthropic endeavors were rewarded with Berlin’s Medal of Honor, as well as with MTV’s Chiuku award.

The coveted Medal of Honor is one in a long string of awards and accolades van Dyk has accumulated. His storied career has seen him achieve the longest run on the Top 100 DJs chart, including two years at No. 1; multiple IDMA awards; and Mixmag declaring him their “Man of the Year.” Last year, he won Mexico’s Lunas del Auditorio award for Best Electronic Music Live Artist.

Over 30 years on from that first serendipitous encounter with electronic music on West Berlin’s radio airwaves, Paul van Dyk is himself inspiring newcomers to his culture. Come to any of his shows today and you’ll see on the dancefloor the free world he for a time could only imagine from behind the Iron Curtain: people of all ethnicities, nationalities, religions, and walks of life coming together to escape the world’s realities, celebrate, and live in the moment. “To me,” he says, “only dance music has this power to reconcile the historic divisions of the planet like this.”