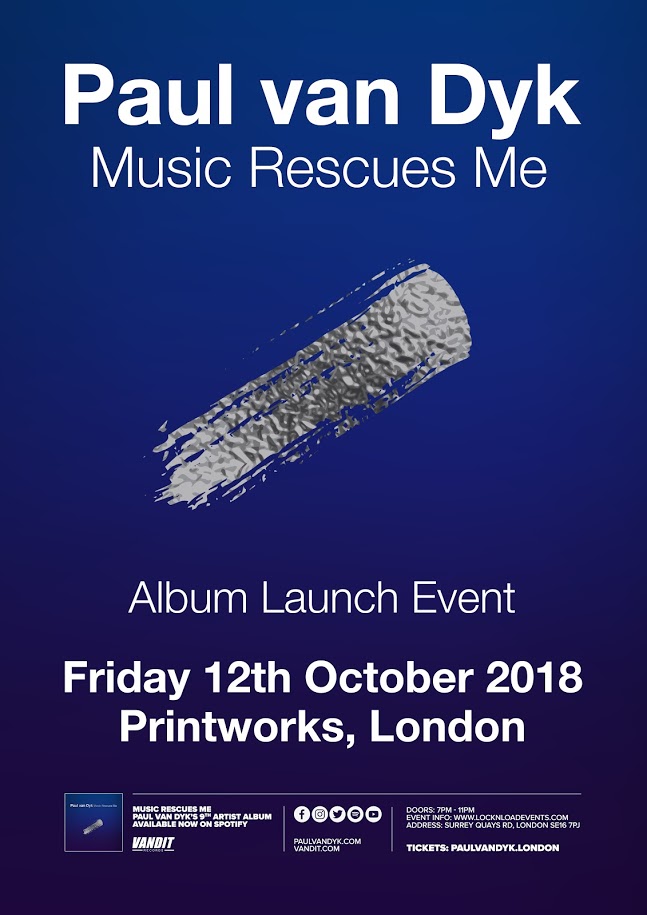 Hands up who saw this one coming! In a move as welcome as it is unforeseen, Paul van Dyk surprise announced today news that a new album’s inbound. In production under-the-radar for nine months, it is (according to the empirical source) “in the final stages of recording” and – signalling a newly won creative flow – will release just a year after ‘From Then On’.

The album will come under the title ‘Music Rescues Me’, with its concept originating from PvD’s interest in “historic mysteries, clandestine societies and their respective codes & cyphered meanings”.

The other major takeaway today (and giving audiences the clearest possible idea as to when ‘Music Rescues Me’ will materialise) is that pre-registration has unlocked for the album’s October launch show. It’s an extra special, first-of-its-kind deal too, with new London club landmark The Printworks housing the début performance. At once industrially atmospheric and ethereally gothic, PvD saw the former newspaper printing plant as the perfect backdrop to frame ‘Music Rescues Me’. Having already played host to some of the biggest names in electronic music, on October 12 van Dyk will become the first artist to send trance around its history-infused walls.

If you want to guarantee yourself one of the limited day-one places available to experience ‘Music Rescues Me’ music, now is the time to act. You can pre-register for tickets via paulvandyk.london here.

With the greater part of three months to go until release, further info on the album’s exact nature – collaborations most notably – remains scarce. As recently as his Tomorrowland set however, track Easter Eggs were rumoured to have appeared. With a trail leading through Mysteryland, Creamfields and his SHINE Ibiza sets, more – its hinted – will be there for the keener eyed & eared.

When commenting on the announcement, cryptically, PvD did let a few potential bigger-picture insights slip. Mentioning that the album’s concept would “place historic mysteries in a modern context”, he said ‘Music Rescues Me’ would be “a reflection of the more indistinct nature of today’s world. The ‘story behind the story’, the power behind the power, etc has always has always fascinated me – this album’s going to hold a mirror up to that”.