PT Events did the ultimate once again. Saturday April 16th 2016 was another night to remember in the history of Grotesque events. The atmosphere in Central Studios was absolutely amazing again. The GIF 2016 gathered with its ‘Spring Edition’ more than 2000 delirious visitors who were treated with the ultimate party experience until late into the night..

From many countries trance enthusiasts came over with high expectations for the night. As always, the bar was again set a bit higher and it showed in it’s beautiful decor, with 2 absolute eye-catching stages, Rarely the organization was able to execute such a breathtaking show into the smallest detail. Really everything was right this night. The banging beats from the phenomenal sound system were accompanied by a colorful, mind-blowing light show. The combination with many Special FX brought the visitors in state of ecstasy!

Grotesque was listening to her audience – Prices

PT Events had clearly learned from the previous edition. Drink tokens could therefore be ordered online in advance. The token price was also lowered a bit and starts at € 2.75 (ex fee). The same applied to the wristbands for the toilet, they were lowered to € 2,=. And last but not least, an extra cleaning staff was present to assure the visitors a clean toilet. This is how PT Events responded to feedback from its visitors and show what they stand for..

Check out the possibilities here!!

At the festival market the Grotesque 2015 Compilation CD appeared to be very hot item for the visitors. This awesome double cd, mixed by RAM and Mark Sherry was sold like crazy, but is still available in the (online) stores too, since February 5th. When you use discount code: GrotesueNow you buy this compilation cd for only € 9,99 (valid until 14-2)

What about the music then?? That couldn’t have been better! Starring Emma Hewitt

There were so many musical highlights, that they hardly could be counted. The always early attending Grotesque crowd were immediately in the right mood. Almost every act excelled in quality, originality or enthusiasm. The line-up was huge. Room was overpowered by the raw acids of Bryan Kearney and the beautiful live performance of Australian Emma Hewitt was spot on. Not very often a vocalist has been able to get such a big response of the audience. Together with legend John Askew, Jordan Suckley, RAM, Sneijder, Arctic Moon and many more the musical experience was massive!

Thank You so much!

PT Events would like to thank all its guests for their confidence and special energy, that they always bring to the Grotesue events. “ It’s this vibe, that our crowd brings time after time to a Grotesque night that makes it more interesting and fun to keep raising the bar for ourselves”, Patrick and Ram said, who can look back to another spectacular edition of the Grotesque Indoor Festival.

Did you miss this incredible Spring Edition of the Grotesque Indoor Festival or were you just unable to attend for some reason…….. don’t feel sad. We have VERY GOOD NEWS for you: This party report was nothing more than a look into the near future and you can still be a part of this great event to come, April 16th. And better yet… there are still tickets available for a very special price of € 35,=. There are still 280 tickets of the available 500 for this price left. For tickets and more info please visit the renewed website of PT Events or sign up on Facebook. 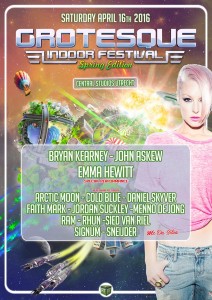