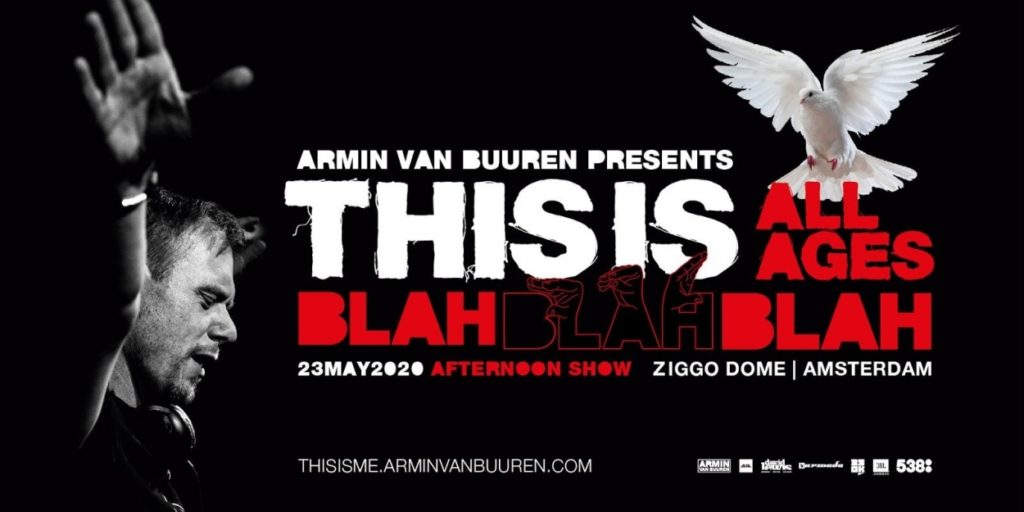 Following the sell-out success of his ‘This Is Me’ shows at the Ziggo Dome this spring, Dutch superstar Armin van Buuren has now announced a special all-ages edition of the show, titled ‘This Is Blah Blah Blah’, taking place on Saturday 23 May. ‘This Is Blah Blah Blah’ is a tribute to one of Armin van Buuren’s biggest hits of the same name, and will allow children to experience all the magic of an Armin performance for the very first time. With his run of ‘This Is Me’ shows at the Amsterdam venue selling out in record time, this Saturday matinee will give many first-time attendees a chance to hear all his biggest tracks, with the trance titan adding:

“During my most recent tour I realized that my children have never had the opportunity to see a live performance of mine. I would like to not only share my love for electronic music and trance with my own children, but to give all young fans the opportunity to attend a show and feel the energy that comes with a show of this format. I hope it is an inspiration for them.”

With the two-hour event taking place at 2pm (with doors opening from 12.30pm onwards), ‘This is Blah Blah Blah’ is an event accessible for all ages. Kids under 12 have to be accompanied by a person of 16 years or older. ALDA advises parents with children under the age of 8 years old to buy a seated ticket on the first ring. With extra seats added to the venue for this special edition show young fans and their guardians are invited to enjoy a selection of Armin van Buuren’s biggest radio hits, and big-room festival anthems.

Widely recognised as one of the most popular DJ/producers in the world, Armin van Buuren has topped the DJ Mag Top 100 poll on numerous occasions, previously selling out the legendary Johan Cruijff ArenA with his ‘The Best of Armin Only’ events. Performing as a headliner in all of the biggest festivals year-upon-year, Armin van Buuren’s latest album ‘Balance’ earned gold certification within just 5 days, with his forthcoming ‘This Is Me’ shows following the recent edition of ‘A State of Trance’ in Utrecht. The 950th episode of the weekly radio show – broadcast to more than 40 million listeners across 84 countries – sold-out faster than ever before, cementing Armin van Buuren’s spot at the summit of the electronic industry. Ticket sales for ‘This is Blah Blah Blah’ will start this Saturday 29th February, at 12pm CET. 2020 is already looking like another big year for AVB. His State of Trance single-day summertime London gathering just unveiled a huge line-up. He’s also busy with duties as global ambassador for the world-wide fund for nature charity.