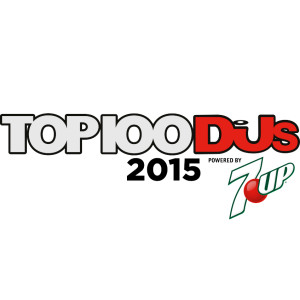 2014 saw over 900,000 votes from over 200 countries, with Dutch star, Hardwell, retaining the No.1 spot for the second year. He performed a headline set at the Top 100 DJs Poll events in Amsterdam and London. Showing the strength and diversity of the global electronic music scene, there were 24 new entries in last year’s Poll, with a total of 30,000 DJs voted for.

For the third consecutive year, the Top 100 DJs Poll Awards powered by 7UP will be held on 16 October at the Amsterdam Music Festival (AMF); returning for the second time to Amsterdam ArenA, the stadium for Ajax football club. The following day, London’s prestigious Brixton Academy will once again play host to the UK Poll winners event, and will feature headline sets from the world’s biggest DJs, including this year’s newly crowned No.1 DJ.

The Poll’s headline sponsor for 2015 is 7UP, who will also be presenting the Next UP Award powered by 7UP, awarded to this year’s highest new entry.

The Top 100 DJs Foundation (registered at the Dutch Chamber of Commerce No.61608947) is the official charity partner of Top 100 DJs. The foundation will be an integral part of Top 100 DJs in 2015, enabling voters to engage in the causes that mean the most to them, and inviting dance music artists, DJs and fans to create a tangible and lasting impact.

Top 100 DJs is now a global tour concept, bringing the Top 100 DJs experience to more people than ever before. Large outdoor events in Istanbul, Sofia and Beiruit have already taken place this year featuring artists from the poll. More events, in association with Alda Events are planned throughout 2015 and into 2016.

DJ Magazine will reveal a raft of brand activity planned for ADE 2015, with details to be announced soon.

The Top 100 DJs Poll powered by 7UP is a publicly voted poll that inspires fierce debate across the year with speculation on the world’s No.1 DJ, new entries and biggest climbers dominating online discussion and beyond.

HISTORY OF THE POLL
The Top 100 DJs Poll began as an editorial feature in October 1993, to celebrate DJ Mag’s 100th issue. It was predominantly UK-based at first, but when the poll was opened up to the international scene via website voting, it truly exploded. There have been a few attempts at imitation, but DJ Mag’s Top 100 DJs Poll has remained the definitive list. As well as its significance for individual DJs, the Top 100 DJs Poll also documents the growth – or decline – of dance music scenes, reflecting the ebb and flow of genres as new sounds and scenes take hold and spread.

TOP 100 DJS FOUNDATION
The Top 100 DJs Foundation (registered at the Dutch Chamber of Commerce No.61608947) is the official charity partner of Top 100 DJs. The foundation will be an integral part of Top 100 DJs in 2015, enabling voters to select the causes that mean the most to them, and inviting dance music artists, DJs and fans to create tangible and lasting impact.

ABOUT 7UP:
7UP is one of many flavorful brands in the beverage portfolio of Dr Pepper Snapple Group (NYSE: DPS). A favorite since 1929, 7UP is THE UNCOLA. 7UP is available in Regular, 10 calorie, Diet and Cherry varieties. DPS is a leading producer of flavored beverages, marketing 50-plus beverage brands across North America and the Caribbean. For more information, visit 7UP.com or DrPepperSnapple.com. For the brand’s latest news and updates, follow 7UP at Facebook.com/7UP or Twitter.com/7UP.

ABOUT ALDA EVENTS:
ALDA Events is a global producer, concept developer and promoter of DJ and event concepts. ALDA Events works from a ‘whole concept perspective’ using her broad experience and knowledge in the field of stage design, technical production, video, special effects, decor design and entertainment for every production and collaborates with world famous DJs such as Armin van Buuren, Hardwell, Sander van Doorn and Sunnery James & Ryan Marciano.

ABOUT LOCK N LOAD EVENTS:
Lock N Load Events is a vibrant, independent company, responsible for events like South West Four, Together at Amnesia Ibiza and The Gallery at Ministry of Sound, London. Whether it’s a small showcase to a festival for 60,000 people, we pride ourselves on our individuality. Every event is carefully selected and developed and professionally managed with the highest attention to detail.